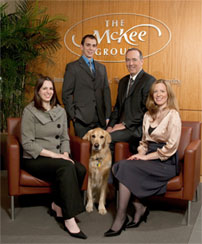 When The McKee Group opened its first 55+ community 35 years ago, they became known as innovators in building active adult communities in the Delaware Valley. They remain a leader in 55+ clubhouse communities today, garnering local, regional and national awards. Recognizing that today’s lifestyles make maintenance-free homes attractive to busy people of all ages. The McKee Group added luxury carriage homes with internal courtyards to the menu of lifestyle choices it offers in a community that received national attention for its innovative design and outstanding sales pace.

In addition to 55+ communities, The McKee Group owns and operates several garden apartment complexes. The fact that some tenants have resided in the same McKee Group apartment for more than 25 years is a testament to the Company’s management abilities. The Commercial Division has increased its holdings both by purchasing existing facilities and by obtaining raw ground and completing the entitlement and construction process. Company staff manage all of its commercial investment properties. McKee Plaza, a trio of office buildings ideally located on Route 320, adjacent to the Route 1 exit of the Blue Route, is the centerpiece of a portfolio of office buildings that consistently exceed 90% occupancy. A Storage Depot, The McKee Group’s self-storage business, includes six locations throughout Pennsylvania, New Jersey and Maryland.

Currently, The McKee Group is focusing its development efforts on regional lifestyle centers where housing is a component of a vibrant, walkable community in which to live, work and shop. The first potential community, on the site of the former Franklin Mint in Media, is in the approval process.

The McKee Group prides itself on combining entrepreneurial nimbleness and solid financial practices that have been responsible for its past success and its exciting future.

A Commitment to Caring

The McKee Group believes in giving back to our community. In recent years, our commitment to caring has included donations of time and dollars and the development of special fund raising events.

The annual Frank A. McKee Charity Golf Classic invites players to swing for a worthy cause. Proceeds from the golf tournament are donated to a different organization each year. In 2014, The McKee Group’s efforts raised $30,000.

Homes for Our Troops

Soldiers who return from war with severe injuries often have special housing needs. Working in cooperation with Homes for Our Troops, The McKee Group organized a team of local contractors, suppliers and contributors to build a beautiful new home for a deserving soldier.

The McKee Group is proud to support Habitat for Humanity in fulfilling its mission of helping families realize the dream of home ownership.

Animals deserve care too. McKee Group Vice President, Frank McKee, Jr., donates his time and energy to the Delaware County SPCA. Frank has served on the board of directors, volunteers for the SPCA’s many outreach programs, and organizes donation drives for the SPCA food pantry.

Serving the heroes who serve us is an honor for The McKee Group. In 2013, we partnered with the American Warrior Initiative and other organizations to build a home for a U.S. Army veteran who was also a Purple Heart recipient. McKee donated the labor needed to construct the home.